I had a rare free night last Thursday that I’d planned to fill with writing. Although earlier that day, I learned that cancer took a friend of ours and I didn’t know what to say about it (if anything).

So, instead of writing, I drew.

I’ve been devouring podcasts and books lately – some on creative topics that mostly say the same thing: If you’re not feeling creative, you just have to start creating. Like any new venture, this moment is always the hardest; an eat-the-elephant-one-bite-at-a-time moment. (The connection of this Atomic Habit pivotal moment isn’t lost on me.)

I sharpened my colored pencils, found a small scrap of yellow paper, and sat down to draw. It’s no wonder therapy is often combined with the arts. There is something so soothing about watching continuous lines on paper and creating something out of nothing.

I bared down on some strokes and scribbled in others. I lost myself in hypnotic cross-hatching and quickly dismissed the thought that it was going to mess up the composition. Who cares?

Before I knew it, there she was:

“…If truth and honesty are written across her face, she will be beautiful.”
—Eleanor Roosevelt

The yellowed drawing had a hint of familiarity. Five years ago, I’d painted another self-portrait using the same scheme.

When What Dreams May Come came out in 1998, my literature class did a study on the color symbolism in the film. This is still one of my favorite movies today. (I mean, running through a field of paint? Come on!) 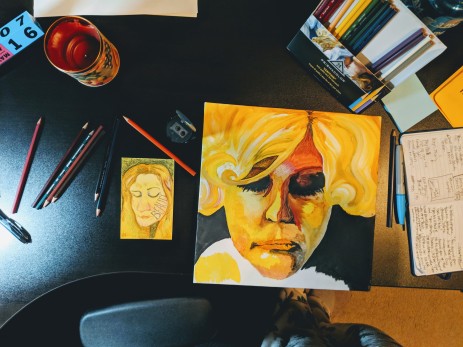 Looking at my two creations side-by-side through this lens, there are some obvious similarities that I didn’t consciously intend… but maybe subconsciously? It makes sense. The black backgrounds. The hair and skin, yellow. Sullen expressions. And in real life, it often feels tough to be a light in the darkness.

I’ve been reading a lot lately on courage, compassion, and connection. On more than one occasion in the past, I’ve had friends tell me that I don’t let them in. Emotions? Those are for the weak! No one will ever see me sweat.

At the beginning of this year, I found the thought of friendships exhausting. Now, I get it.

“One of the greatest barriers to connection is the cultural importance we place on ‘going it alone.’ Somehow we’ve come to equate success with not needing anyone. Many of us are willing to extend a helping hand, but we’re very reluctant to reach out for help when we need it ourselves. It’s as if we’ve divided the world into ‘those who offer help’ and ‘those who need help.’ The truth is that we are both.

The Wholehearted journey is not the path of least resistance. It’s a path of consciousness and choice. And, to be honest, it’s a little counter-culture. The willingness to tell our stories, feel the pain of others, and stay genuinely connected in this disconnected world is not something we can do halfheartedly.

To practice courage, compassion, and connection is to look at life and the people around us, and say, ‘I’m all in.'”
—Brené Brown, The Gifts of Imperfection

A dear friend and I were at dinner a couple of weeks ago and I was sharing what I’d learned about depression. Scientifically, it’s not actually a “low” as often described, but rather the void of emotion altogether. The light bulb moment for me was realizing that the “lows” we sometimes feel are part of a full range of living. The good news is that when the pendulum swings, the highest highs feel extra sweet because we have experienced the depths, as well!

Knowing what I know now, if that’s what it takes – vulnerability, risk, the highs, the lows, courage, compassion, connection – I’m all in.